How to convince your product owners that it's in their best interest to release early and add polish later? It seems that many others have spent a lot of time trying to figure this out, and we’d like to offer our take on this as well.

Starting an own business, we consider just hypotheses that yet only coming to check. This approach supposes thus that creating a product, you create exactly as much as it is needed for testing, no more or less than. So what exactly do you "test" in your product?

An expert in the methodology of startup economy, Eric Rise, asserts that you have to test the "viability" of a product. Exactly he entered the first term of startupers on the conscious way of creation of internet company - MVP (Minimum Viable Product).

The most favorite example of Rise that he loves to bring up in public performances is the creation of landing page with a description of our service to count conversion of clicks and conversion of subscribers. It will help us to understand whether a product (service) causes some interest. Sometimes, it is even better to specify a price, watching its influence on indexes. 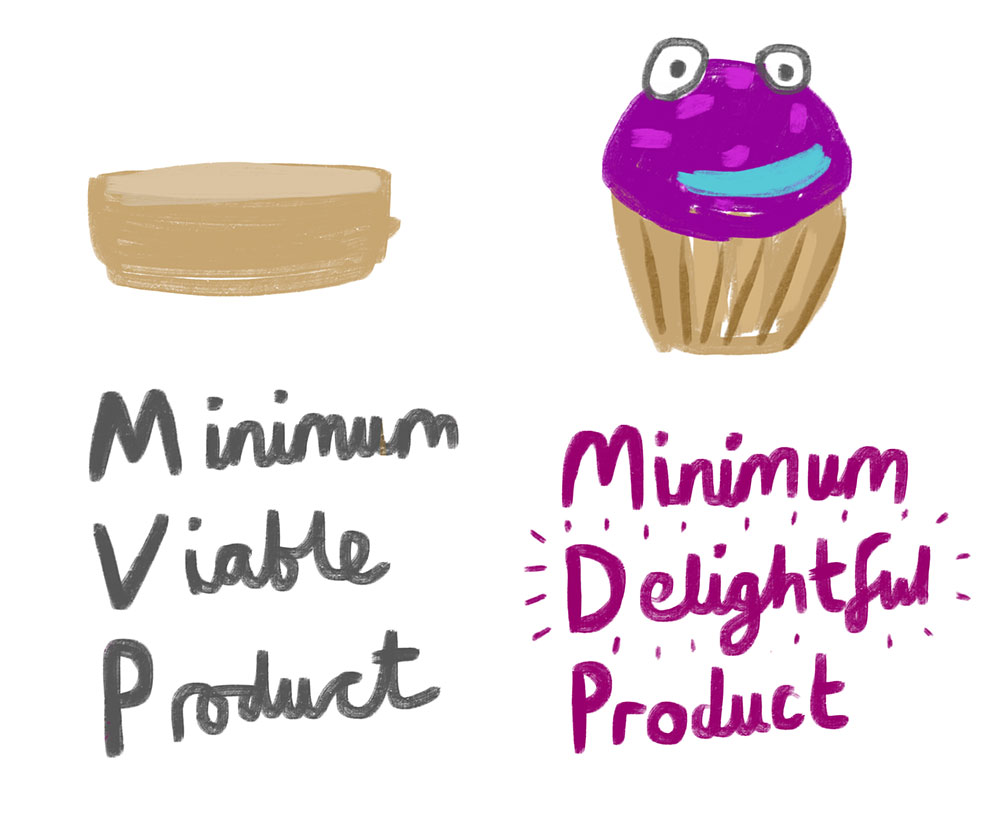 Viability is a very important parameter which requires verification. But, if you look around, you will understand that it is not the only one index. This is exactly the most widespread mistake: everybody creates MVP, even unaware that there are some other parameters that can appear much more important for your project.

So, everything is clear about MVP now. It is not always a good idea, but then what we have to look for? The answer is simple enough - MDP (Minimum Delightful Product). MDP creating is much difficult: it is not enough to overtake traffic on a landing page, to become №1 in popular searches of App Store or to get a mention in the press. Still, you can play with numbers and people, and habit exists or not.

MDP can be defined as the minimum possible experience of co-operating with a product (product experience) that is enough, to prove or check the high value of the product for a user and high satisfaction from its use, including emotions.

To create an MDP, you have to give the kernel of experience of the use of the product, which allows to users fully estimate it, but not simply to create a landing page. Instead of measuring of indexes, which are interesting to you (for example, money or conversion) and counting you possible income, you must understand, what kind of indexes talk about the satisfaction of user from the use of your product (service). And for every separate product, these indexes will be different.

Here are several examples, which help to understand the difference between MVP and MDP:

To sum up, we can say that an MVP is very important for a successful product. If to miss out a business constituent, you are risking to create a very popular product with very bad monetization (like FourSquare, SoundCloud, etc.). But at the same time, following exceptionally the indexes, you can make a very big mistake. You will be able to notice it only when it’s already too late, or you will miss out the possibility to join a perspective project. Keep it in your mind and good luck in your endeavors!

The pros and cons of option online trading

The financial trading software is very required nowadays since more startups see this as a profitable business. What is worth pursuing, and what to avoid?

How to estimate the value of a startup?

What do you need to get the attention of investors and funding to start your own business ideas?

The Death of the SEO market

How to beat the competition in the market when all genius has long been thought up to you?
Back To Blog