NEOBANK for fintech business: features of a digital bank

The banking sector of the fintech industry has been actively transforming over the last five years: the number of neo-banks in the market is increasing, the classic branches are closing, and the customer is confidently moving to digital.

Today's students are a generation of people who will most likely never go to a bank branch in their lifetime. This does not mean that they will not use banking services. On the contrary - they will actively pay non-cash, take loans, and open deposits, but all the interaction "bank-client" will take place in their smartphone. And it is for this audience - Generation Z - that non-banks are already competing today.

Evolution of traditional banks instead of revolution

In the US market, neobanks have become known as Challenger Bank, as they have challenged the system and gone beyond traditional service. They differ from the classic ones, first of all, by their own high-tech IT infrastructure. This is the basis for creating innovative banking products and processes, integrating databases and collaborations with other services, which allows you to quickly adapt to change. 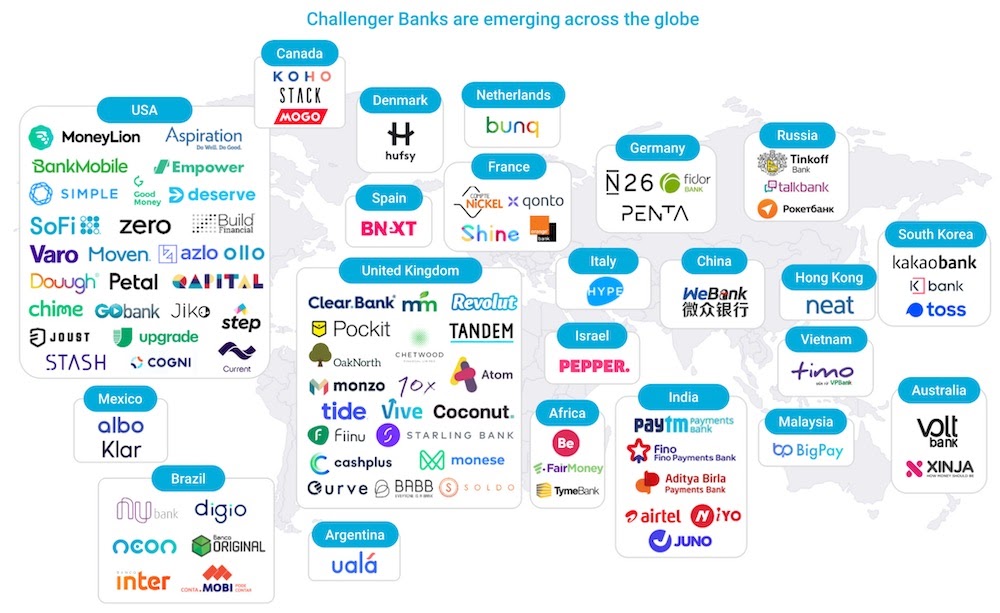 Yet neobanks have transformed the industry, albeit not in the way analysts had anticipated. They didn’t oust the monopolies from the market, but they changed the standards - thanks to them, mobile banking began to develop, the range of digital banking services expanded, and competitors began to pay more attention to the UX and design of their applications. Compare the interfaces of banking applications five years ago and today: they have become more user-friendly and responsive, although they still require additional effort from the user. For example, to open an account with HSBC, you need to make 99 clicks, while in Revolut - only 24.

Neobanks have partly stimulated the development of ecosystems in the financial sector. It would seem, why does a bank need a food delivery service or a streaming platform? And why turn a branch into a pick-up point? Each additional add-on helps to better understand the needs of the audience and offer them more relevant financial products. Neobanks, with their approach to UX and analytics, initially had an advantage: with less data, they got more value out of it because they better understood their target audience.

Another feature is flexibility and adaptability. For example, American startup Chime found that millennials prefer debit cards to credit cards, but at the same time want to improve their credit score. Then neobank launched a hybrid product that combines debit and credit functions. Much of the flexibility is due to the less developed infrastructure of neobanks: they do not operate a huge range of financial services, so they riskless. Conventionally, one failure will not lead to multi-million dollar losses, so it is easier for them to experiment. And it is easier for large banks to integrate ready-made start-up solutions into their ecosystems than to create their own product from scratch.

At the same time, formally, both neobanks and “conservatives” still work according to a similar model, the only difference is in the “shell”. Moreover, in an effort to increase margins, neobanks are borrowing the tactics of traditional banks. So, the British startup Monzo at some stage planned to launch a financial marketplace, but after receiving a banking license, it followed the classic path: it introduced overdraft accounts and started issuing loans directly.

While neobanks are following the traditional path, new products are being launched by software development companies. They are gradually offering more and more financial services, capturing new niches, and in terms of UX and convenience, they are not inferior to neobanks. Analysts admit that the conditional Google or Apple will soon become the largest fintech company, and banks, in principle, will not be needed.

There are several variants of models for organizing neobanks in the world.

Some neobanks have received a full banking license, and their regulation is no different from ordinary banks. At the same time, specifically for the needs of neobanks, a number of countries have introduced a limited type of banking licenses, which are provided as an intermediate stage before obtaining a full-fledged banking license. In such cases, neobanks were able to increase their resources for a full-fledged entry into the banking sector without reducing requirements from the regulator. This type of license is available, for example, in the UK and Australia. 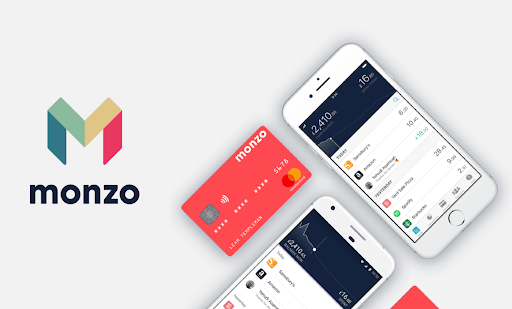 Cooperation model with another bank

Another model is that neobanks cooperate with existing banks. In this case, all obligations to adhere to regulatory requirements, along with credit risks, lie with partner banks, while neobank provides only technological solutions. 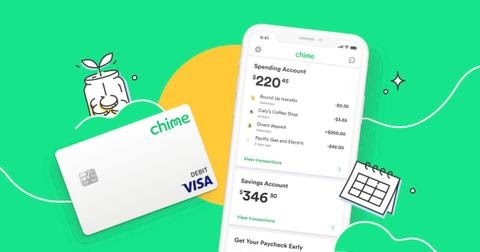 Some neobanks only obtain licenses for some financial services and conduct other activities through partnerships with conventional banks. For example, in Europe, the EMI (Electronic Money Instutution) license permits a neobank to issue cards, transfer funds, and issue electronic money. Other services, such as opening deposit accounts, can be provided by neobanks only through cooperation with ordinary banks. 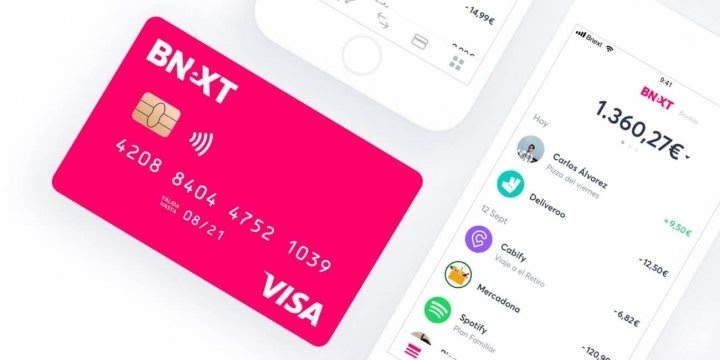 The number of contactless payments and online payments in Ukraine is growing. According to Mastercard, in the first quarter of 2020 compared to the fourth quarter of 2019, their number increased by 7% and 8%, respectively. Ukrainians are actively making payments online, especially now that they have to spend more time at home, in isolation, and in quarantine. It's fast, convenient, and safe. Given these trends, all businesses, without exception, are adapting and digitalizing - traditional banks are no exception.

According to the Mastercard survey conducted in 2019, Ukraine is among the top ten European countries in terms of NFC payments and ranks 4th in the world in terms of growth rate, surpassing Poland, Canada, and a number of European countries. Over the past two years, we have increased 90 times the transactions of contactless payments using a smartphone and the number of connected devices for NFC payments is growing by 25% every month. A Kantar MMI study published in October found that every 5th smartphone owner between the ages of 12 and 65 uses ApplePay or GooglePlay once a month and more often. This is about 1.7 million Ukrainians. 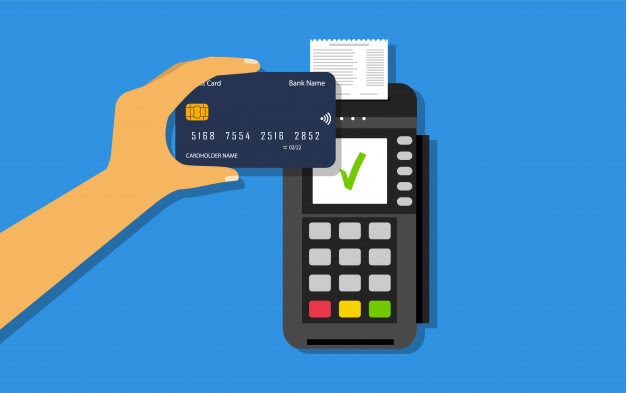 This situation contributes to the emergence of new neo-banks in our country. The user gets more and more opportunities on better terms and therefore increasingly prefers "banks in the smartphone". And the competition motivates the latter to develop and fight for the customer, offering him a more convenient mobile application and more favorable conditions.

For example, in Britain, which is considered the locomotive of the world's neo-bank, today more than 125 players successfully coexist. High competition in the market allows them to keep each other in shape and keep improving, which often happens in stable markets.

This is especially important in a fast-paced and volatile market, aimed at capturing a young demanding audience of millennial users (digital nomads). Therefore, non-banks "play" not only and not so much in the field of financial services, as an intermediary for the client and give him a convenient tool to meet all needs. Want to buy a train ticket - easy, order a taxi - no problem, pay utilities - please, book a table in a restaurant - two clicks. And still, get a profitable cashback for it. And most importantly - to do so could be easy.

The future of neobanks

The future is not for neobanks, but for the neobank model - virtual services will become a standard in many areas, including the financial sector. At the same time, heightened competition with IT giants will lead to an even greater blurring of boundaries in fintech. Tech companies will provide financial services, while banks, on the contrary, will offer digital services.

At the same time, the development of Open Banking, namely the emergence of open programming interfaces and the creation of conditions for the free exchange of data, will provide startups with more resources for growth. This will allow them to find new niches and create fintech add-ons that will generate the bulk of the revenue. Therefore, neobanks will gradually rely not so much on end-users as on b2b services for small and medium-sized businesses, freelancers and self-employed. As startups grow, they will create their own platforms and ecosystems, this will help them strengthen their position in the market, but at the same time, it will intensify competition, as the border between traditional players and neobanks will finally be erased.

Neobanks is a promising trend in the global financial system. It is unlikely that they will completely replace the traditional ones, but, obviously, they will become more and more every year. The weak will die, the strong will become stronger. And most likely in the next few years, we will see a new trend in the banking sector: a kind of hybrid of neo and classic banking. For example, traditional banks will increase the direction of digital on their side and at the same time consider the possibility of mergers and acquisitions (M&A) with non-banks, provided the relevant value for money.

Working with the fintech industry for many years, our dedicated software development team can help you bring such projects to life and implement them within a reasonable budget and time frame.

This article on Logistics Trends explores these issues in detail. You will find that designing an advanced robot is costly and a major technological challenge.

Why Nordics are the most leading in fintech development

Let’s review the latest north fintech development trends and how it affects the global market.

What are future TMS and SaaS solutions in logistics?

Automation of transport logistics allows a cargo transportation company to provide quality services through the implementation of a software complex.
Back To Blog